Why Having Goals Can Destroy Your Life 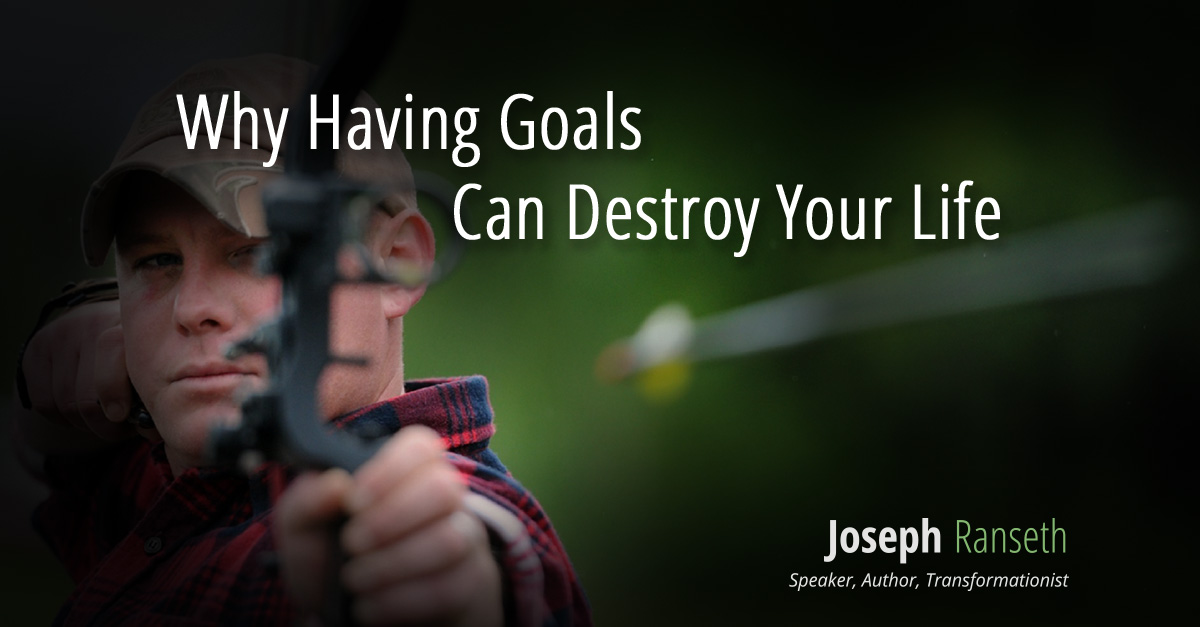 This was so good that I decided to republish it in entirety.  Special thanks to www.VinceHarris.com, author of www.TheProductivityEpiphany.com:

Does that shock you to hear that having goals can destroy your life? If so, please know that your thinking is normal. After all, we’ve heard one speaker after another talk about the virtues of having a goal, and how we can achieve anything we want if we’ll just set goals. In fact, I’ll bet at some point you’ve even heard about the famous study on goals conducted a Yale years ago.

In this study- a study that was initiated in 1953- researchers surveyed those who were graduating from Yale. After the survey the researchers found that only 3% of the graduating seniors had clear and specific written goals. 20 years later it was discovered that the 3% that had written goals had accumulated more wealth than the other 97% combined.

Impressive, right? The story is impressive, but you see, there’s one BIG problem with the story: it’s a lie. Yale University Research Associate, Beverly Waters completed an extensive search, digging through Yale records and archives. Her conclusion? The study is an urban myth-it NEVER HAPPENED.

I have to admit, on my personal development path I bought hook line and sinker into this compelling story. So did just about everyone else that was striving to improve their lot in life.

Let me make one thing clear: Goals ARE powerful tools for accomplishing more than you would have without them, but only if you are able to avoid the deadly mistake that almost everyone makes, and we’ll get to that in a moment.

First, though, take a moment to consider all of the things in your life that you have accomplished, things you are proud of, that you didn’t have a goal about. As you begin to look at your life in detail, you’ll see that some of your greatest accomplishments did not spring forth from a written goal- you just did what had to be done and accomplished them.

Next, ( and this can be a little depressing:) think about all of the things you did set goals for, but that you never even came close to achieving. If you’ve been a “goal setter” for many years, don’t think about this for too long, because this list, for most people, is longer than they would like.

I remember the day in February of 1986, when I was notified that I had been issued my license; I was now an officially licensed insurance agent in the State of Missouri. What I couldn’t have known at the time, was that my internal state was about to become a “state of misery”.

I had decided to sell insurance after I saw the kind of money a few of my friends were making. They were buying new cars, wearing new suits, and cashing checks for a week that were bigger than what I was making all month. I had a burning desire to have that kind of income in the near future.

There were two major problems with that goal. First, it focused on income. Second, I was thinking only of the future. In a moment you’ll see just how these two slip ups are responsible for millions of well meaning people feeling depressed and frustrated each year.

Most people, when establishing their goal, focus on how they will feel, how happy, how rich, how content, how ecstatic-you name it- after they have accomplished their goal. They rationalize “If I pick something very rewarding, something that will really be worth having in the future, I’ll be able to endure anything I have to get there.”

Almost everyone is overly optimistic about their ability to do things in the future. What they forget about, however, is that the future is only a concept, a thought, and that the only thing that ever truly exists is NOW, the present moment. Life is one present moment after the other from cradle to grave.

If the goal you pick is one that will not allow you to feel inspired, driven, excited, and invigorated in every present moment between right now and the achievement of your goal, then you have picked the wrong goal.

I’ll never forget the day that I realized what a bunch of malarkey “affirmations” were. Oh, believe me, I’ve done my fair share, and, I have discovered a rare situation where they are perhaps beneficial, but in almost every arena that affirmations are promoted, they are not only an utter and complete waste of time, they indicate something far more serious.

To the degree that you need to use willpower, affirmations and “rah, rah” motivation to do what you are doing, you are out of alignment with your purpose.

If what I am saying is true, then why would we even want to have a goal then? That’s a good question, and fortunately, there is also a good answer.

For example, some of my current goals are to write at least 10 more books, create 20 more audio programs and live for a few days, nearly nude, with tribesmen in the Amazon, eating what they eat, and hunting with them each day. I don’t need affirmations.

See, I can’t not write each day. I feel compelled to write, to speak, and to share my ideas with others. The only reason I write down a goal is to help me map out my “how’s” and to stay on course. If the desire isn’t already burning within, I don’t even bother to waste my time calling it a goal. If I did, I would wind up, like so many, trying desperately to harness enough motivation to take action.

I was once on an airplane sitting next to a gentleman who was known for his ability to come on board and turn a struggling company into a booming business. I asked him “How do you motivate your people?” He replied “I don’t; I just hire motivated people!” I just smiled. He too, knew the secret I had just recently discovered. He had just figured it out a long time before I did.

Whatever your goal is, notice how it makes you feel right NOW, about the things you’ll have to do to achieve that goal.

For example, if you desire to be a physician, forget about how you’ll feel after you’re a doctor. That’s irrelevant. The only thing you should be concerned with is how you feel when you think about NOW, and how you’ll feel in all of those “Now’s” that will have to take place before you are a doctor.

If sitting in the classes that you’ll need to take won’t feel as exciting to you as the thought of being a doctor, run the other way as fast as you can; I don’t want you to be a doctor. You might wind up like tens of thousands of other doctors that after having started their practice, find that they really picked the wrong career. I don’t like doctors like that operating on me!

The doctor I want to deal with is the one that was intrigued with, and enjoyed every step of the way; the one that couldn’t wait to get to class each day. Are there doctors like this? Yes. I was in the hospital environment for 5 years, and I’ve met several. Sadly, I’ve met far more that are only doctors now, because they were chasing the dream, instead of asking “How does this goal make me feel NOW?” at the very beginning.

And, remember, we can only be successful to the degree that we are delivering value to others. The more value we deliver, and the more people we deliver it to, the more successful we become.

Vincent Harris is the author of The Productivity Epiphany www.VinceHarris.com
Grab Vince’s book at www.TheProductivityEpiphany.com

How will you implement this post into your life TODAY? Leave me a comment and let me know what you are passionate about and how you will make it a more vibrant reality today…