For years (more years than any of us have been alive) there has been a stigma around mental illness that has prevented us from speaking openly about it. As a sad consequence, there has been an extreme lack of resources for those of us who need help, or perhaps even sadder those resources may exist but an awareness of where or how to find them does not.

We see extreme cases of what happen when help isn’t readily available in such tragedies as the recent Newtown shooting, or virtually a host of other heart-wrenching examples. One thing I have learned in life, though, is that nothing is just good or bad… it’s both. Every shadow has it’s sunshine. All of the darkness that we see such as the many sad stories of untreated mental illness resulting in tragedy all carry a ray of sunshine. It’s apparent to all that because of the recent Newtown tragedy that we are starting to speak more openly about mental illness. (Take, for example, the articles of “I am Adam Lanza’s…”mother, psychiatrist, doctor that sprung up so quickly after the shootings in Connecticut.) We are making great strides in removing the stigma that holds so many of us back from finding the help we need.

I am excited about any and all of these developments that shine light on these important issues, including the recent #BellLetsTalk initiative. But there is also much more that I believe needs to be done. And, I don’t believe the solution is going to be found in talking about mental illness more. It’s a good start, but there is a deeper stigma that needs to be removed. What we really need to do is remove the stigma around mental health.

We do this with health & fitness. Or, at the very least, we are starting to do so a lot more. We no longer just count on our doctor to tell us if we are “healthy” or “unhealthy.” Most people realize that they could be healthier than they currently are, or they see that they are now in a better state of health than they were last year. We all acknowledge that eating more vegetables, and less donuts, will be good our bodies. As will trading in that diet coke for water, the deep fried French fries for a salad, or choosing to walk or bike to work instead of driving our car. Should we not begin to acknowledge the same for our mental wellness? Some things will strengthen it, others will weaken it.

Now this isn’t a discussion about whether doing or not doing something causes mental illness. If you think about physical wellness, nobody is so naive to say that having that one slice of sugar-frosted cake instead of some organic kale chips causes diabetes… BUT we are aware enough to know that it has an effect. We know that one is better for our health than the other. We are also aware that those who regularly opt for the kale chips instead of the cake are far healthier physically. In many ways it’s the same for mental health. Mental illness is a complex issue, far beyond my full comprehension. What I do know, however, is that if we shift our thinking away from either/or this “caused it” or didn’t to what supports or what doesn’t, then we will see much more individual – and collective – progress.

Sadly, we have stigmatized mental health in such a way that many positive things we can do for ourselves are stigmatized as well. Far too often I see the perception that those who work with a therapist, counselor or a coach are broken. Or the sentiment that support groups & group counseling are for the weak. “People only see therapists when they are broken enough to need help to even function in life” is a paradigm that seems to pervade much of the population, and it is holding us back. Big time.

Let’s switch back to the physical health analogy for a second. People who work with personal trainers are rarely viewed as the lowest on the spectrum of physically fitness. In fact, it’s quite the opposite. All the elite athletes work with trainers, or even a team of trainers, and get the best results. When an everyday person hires a personal trainer, they begin to get better results and see a much faster transformation. We often regard them as committed to their goals, motivated and see them as high performers. We admire them for their examples, and often aspire to the same.

Why is it not the same for mental health?

It should be, and it can be. We can make that shift happen.

Improving our own mental wellness

Shifting from a “broken VS healthy” mindset to that a spectrum, allows us to enjoy a much higher quality of life. I’m reminded of a powerful formula that I remember learning as an athlete in high school. 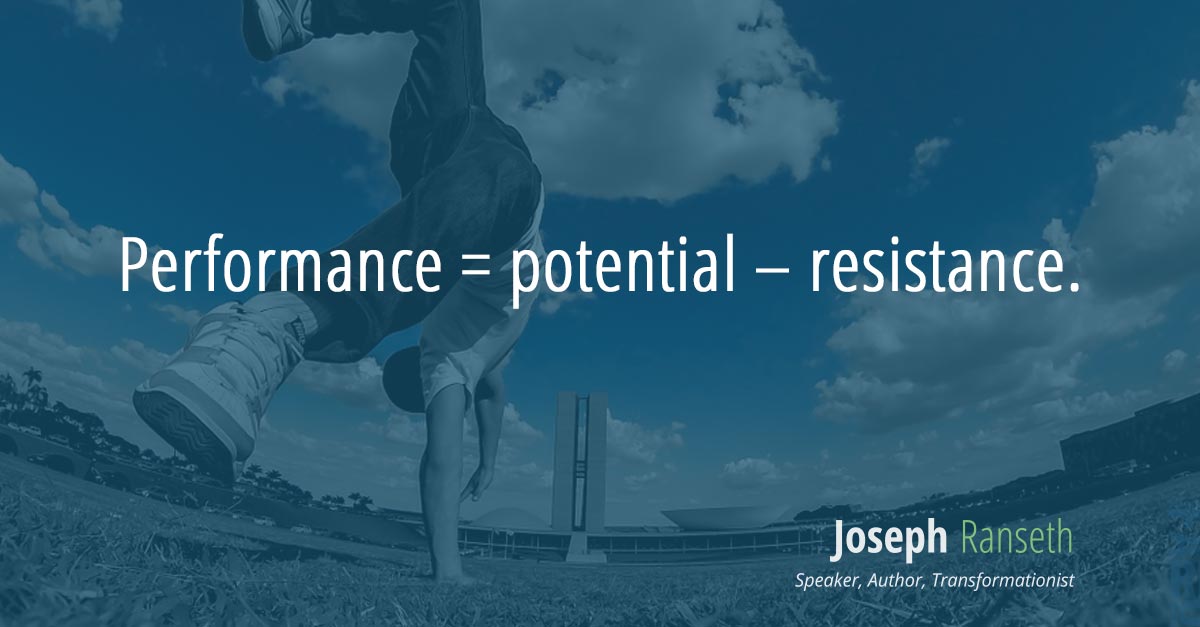 This formula applies to athletics, physics, my career in marketing, and probably in many others. It also applies to mental health.

In simple terms, our happiness in the present moment (potential) is equal to the hope we have in our future (potential), less the degree to which we let the past hold us back (resistance).

Happiness, being the aim & end of our existence, can be increased by improving the view we have of our future, and by eliminating the resistance created by a past we can’t let go of. We can improve our view of the future through the standard path of personal development. Eliminating the resistance of the past is the realm of addressing childhood trauma, learning to embrace our shadows, forgiving others – and ourselves – of less than picture perfect memories.

We need to remove the judgment of others that becomes implicit with the paradigm of mentally ill or not. Instead of this us VS them mindset, a paradigm of a wellness spectrum becomes more of a “we” issue. We’re all in this together, and our communities, and planet, all get better as any individual gets better.

This simplest way to do this is to ask the question “How are you?” and actually mean it. In North America, we use the phrase “how are you?” as a greeting, without expecting a real answer. This is obvious by the way we ask it while still walking past each other. How many times have we automatically answered “I’m good. You?” and just kept walking? Even when we are feeling depressed, neurotic, overwhelmed, etc, we often just say “Good, you?” because we know the asker doesn’t really want to know. I knew a man who would get an honest answer out of anyone he asked, though, because of the simple reason that he’d stop, hold your hand and look you in the eyes as he asked, and then waited for a response. If you’d answer “good, you?” he’d say “How are you really?” and always provoke a thoughtful response.

Also, let’s embrace the positive change of others. I recall the story of a woman who is a Well known speaker on the topic of self-acceptance. An overweight woman herself, she spoke of the power that comes from rejecting society’s skewed notion of runway model beauty and learning to love ourselves exactly as we are. Her message was liberating others, especially those who didn’t fit the mold of tall, skinny, magazine-cover “beautiful.” When, however, she decided to start losing weight (after hearing her doctor report that recent test results showed that her health was in jeopardy) her followers began to criticize her for “selling out” and being inauthentic in her message. What she was really doing, was taking another step forward to improve her quality of life. Eliminating her earlier resistance of feeling inadequate for not being skinny was a powerful step in increasing her happiness and emotional well being. Improving her potential by becoming healthier was another powerful step. We often quote that “misery loves company” but we need to remember to celebrate when people make positive changes, even if those changes may leave us behind temporarily. Instead of holding ourselves and each other back, we need to exhibit attitudes of encouragement and shift to a mindset of “growth loves company” and help each other along on our journey.

So, tell me… How are you today, really?