Should Money Be More Important Than It is??? 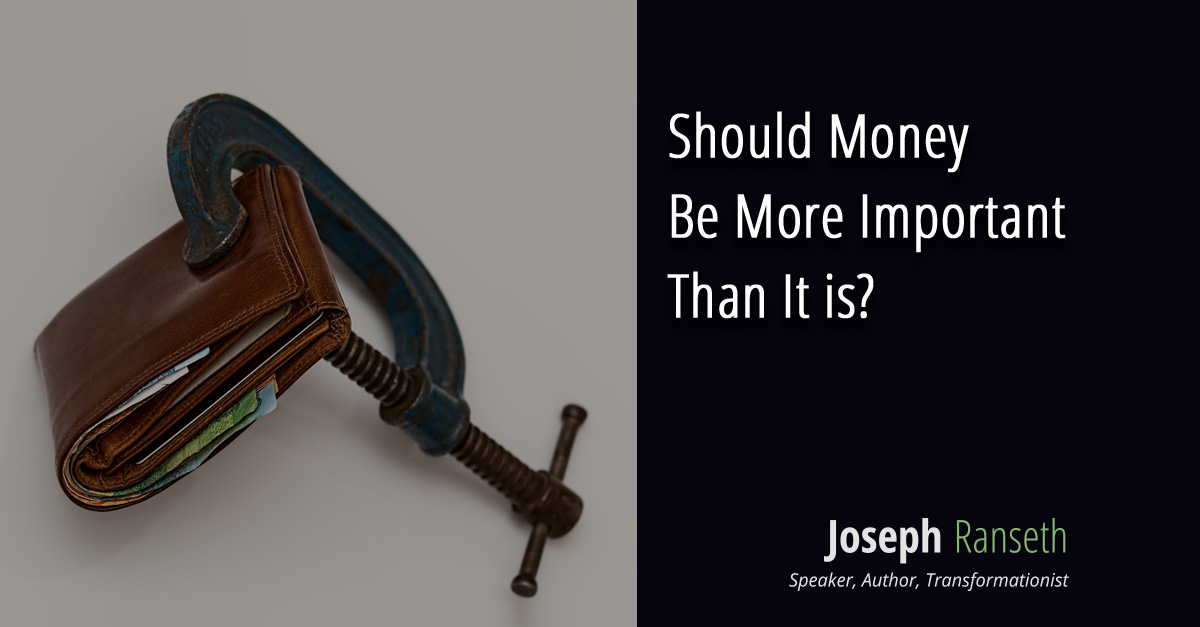 The week that I turned 18 years old, I was ‘lucky’ enough to land a very high-paying job. I was earning a little bit less than $60k per year… with no education, no “skills”, and (incidentally) not much of a sense of self-worth.

My identity became the strength that I had in making money.

The problem was that when I stopped making money (i got bored and started to travel) I also lost my ability to self-identify.  I told people that I used to make a lot of money, and that I had a nice car at home, but the fact that I was hitch-hiking betrayed my ability to confidently make others believe.  I realized that I was trying to live in the past, and my words were the only traction I had to get me there. Pretty empty when you say one thing and deliver another.

Fast forward a few years, and a whole lot of self-esteem later.

I traded in the nice new car for a beautiful 1985 Buick LeSabre… and this was NOT 1985. It was the year 2000. I lived in an apartment that cost me $150 per month and I was making over $10k/month.  I had no debts, but even more important, I had no need to impress with my words, or anything other than who I was as a person. The need to identify by my financial success was gone, and therefore my power to contribute in a meaningful way increased exponentially.  I didn’t tell anyone how much I made, and I gave a lot of it away.  I gave a very significant portion of my income to a charity that was important to me, and I helped many friends that were in need.

It wasn’t all benevolent bliss, though…

I found through difficult experience, though, that some were perceptive enough to realize my financial strength… and they matched it with their financial weakness. Actually, their weakness wasn’t really financial, that was just how they perceived the situation. Their real weakness was in their character. They had something empty inside that they felt needed to be filled from the outside.  Like a child that dreams of a puppy to make all their problems go away, they were seeking to improve their life (the way they felt about themselves) by changing an external variable, and they did it by taking advantage of me.  Fool me once, shame on you, but I wouldn’t be fooled again…

Call it a strength or a weakness, but money just isn’t that important to me.  Far more important is character and contribution. A few years later, I found myself in an even greater financial strength. I was earning a little over $30k per month, and working very little. Instead of working to make even more & more money, I was using my time to volunteer to things that were important to me, and were making a contribution in the lives of other people.

Unfortunately not everyone shares both my indifference toward money, and my ability to manifest it. I found myself in a relationship with someone who had adopted, from years of conditioning in the home, a lack mentality. I don’t know if this is a strength of mine, or a weakness, but it certainly appears to be a survival mechanism… That is, I avoid manifesting the financial success I have done in the past until the character test is passed.

A Hindrance In Relationships?

I see how in one way, this can be a good thing. But in far more practical terms I am seeing that this is a challenge. I find myself conflicted on whether or not I should just be who others want me to be and make lots of money because that is what everyone tells us is the measure of success, or if I should hold out until I have confidence that I am with someone who can be trusted.

Perhaps my biggest struggle is in thinking that my ideal standards may not be right. Perhaps it is too demanding on someone for me to expect them to be oblivious to the external circumstances when money is a real stress in many people’s lives. Perhaps it’s unfair to expect that someone should prove that they are honest, trustworthy and dependable – to my standards – before I share my financial strengths with them.

Am I holding back a part of me, while demanding that someone else should be something other than who they are? Is making someone pass an integrity test before I open up completely to them a manipulative and deceptive practice? I don’t really know the answers, but I do know that I need to find one.

In the pursuit of a dream life, and a dream relationship, is what I am doing cutting me off from the possibility of what it is that I am seeking in the first place?